Will There Be A Post-Lockdown Bounce?

Will There Be A Post-Lockdown Bounce?

The rental market unsurprisingly slowed last month, thanks to the countrywide lockdown, but there were signs that momentum was starting to return to the market once more in the last week of November, as the end of restrictions neared.

The latest Rental Index from Goodlord shows that the market picked up speed again during the last week of November, with renewed activity sparking an above average rate of new applications during a traditionally quiet period for the market.

With tenants beginning to look beyond lockdown, the final days of November saw the market processing 10% more lets than at the same time last year, according to the research.

Tom Mundy, COO of Goodlord, commented: “What is heartening to see is the level of activity during the last week of the month. This is traditionally a quieter time for the market, but we’re now recording new lets at a much higher rate than expected.

“People will be keen to move ahead of Christmas and so agents can expect a busier festive period than normal.” 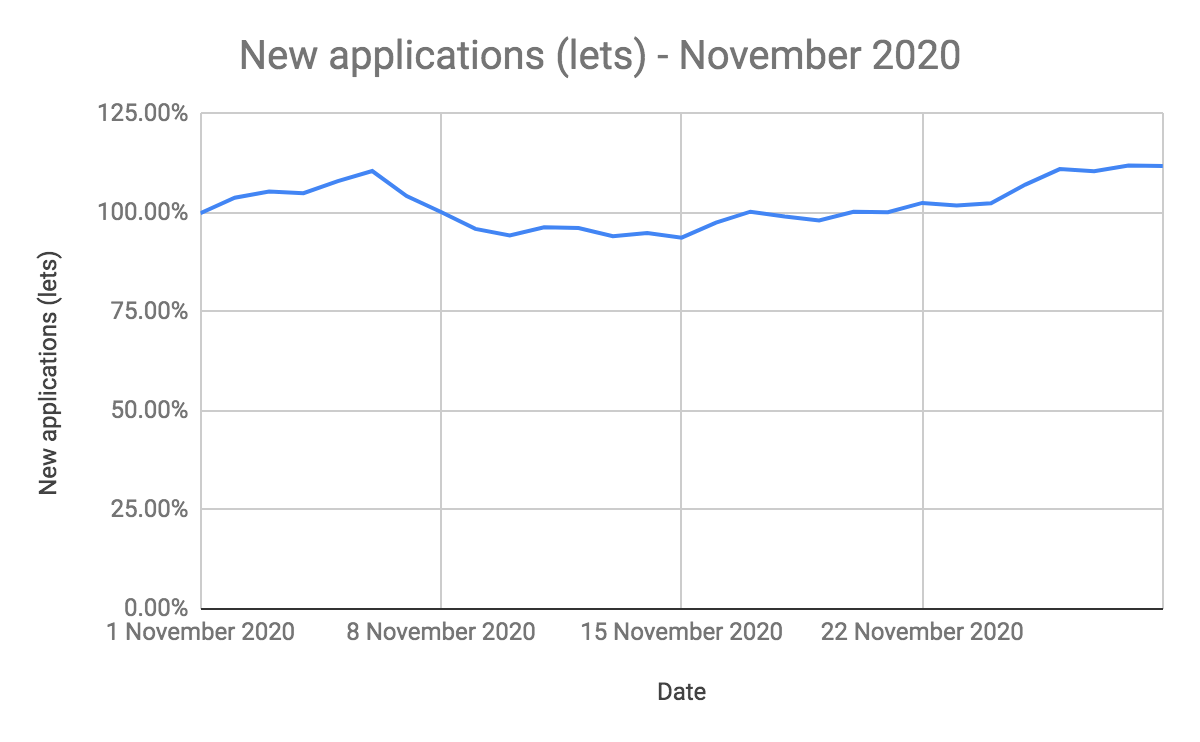 According to Goodlord, the average cost of rent dropped in all regions monitored in November, while void periods increased in most areas, as tenants held off moving during lockdown.

The cost of rent fell by an average of 2.6% across the UK as a whole, with the biggest shift recorded in the North West, where average rents fell by 7%; from an average of £750 per calendar month (pcm) to £701pcm.

The average cost of a rental property in the UK is now £879.03pcm, according to the data. 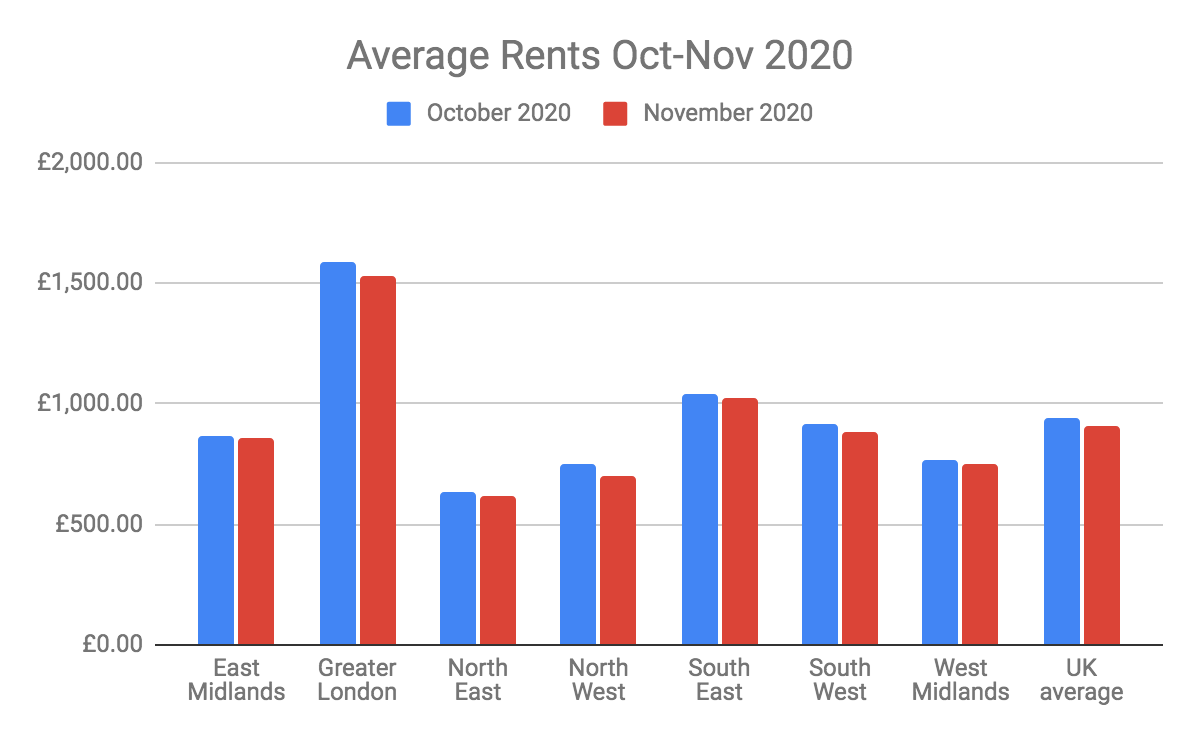 With the market subdued over lockdown, void periods also edged up in most regions. The average void period for England is now 25 days, up from 23 days in October.

The East Midlands saw the biggest rise in voids – jumping from 21 days to a 32 day average. The North West climbed by 6 days (from 25 days to 31). And Greater London and the North East also recorded rises.

The West Midlands held steady month on month. And the South East and South West both recorded decreases in average void periods, with these regional markets recovering well towards the end of November. 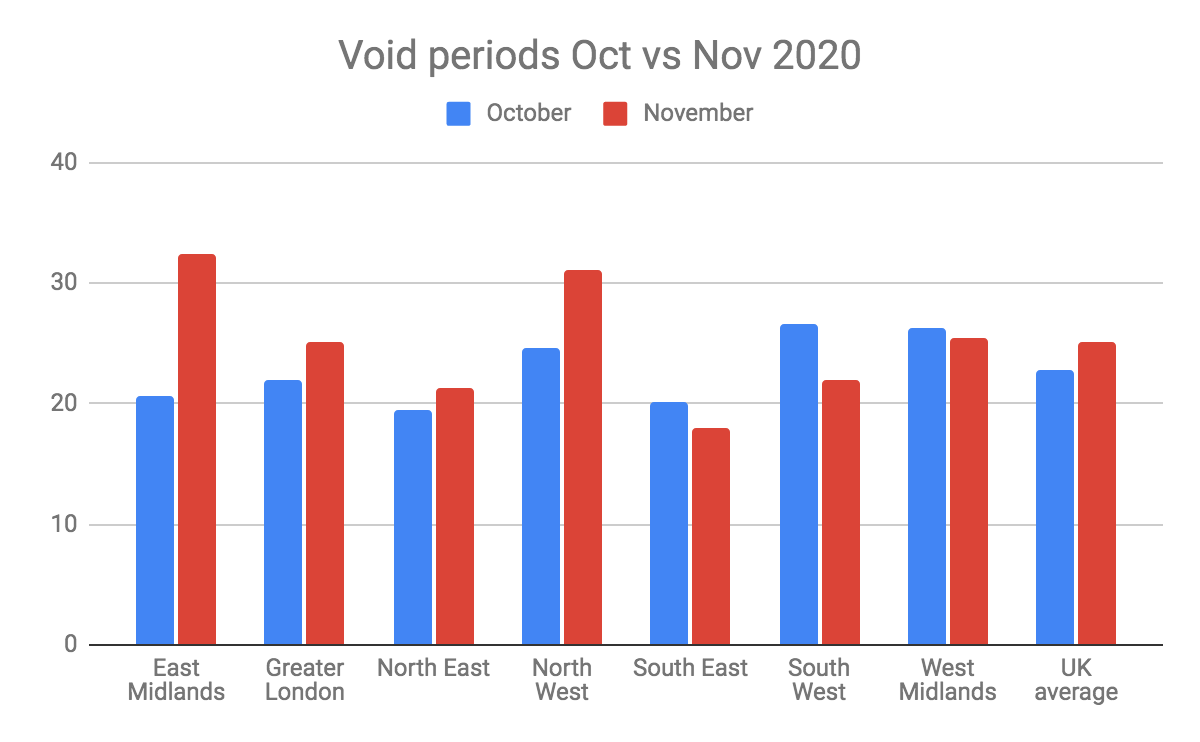 Mundy said: “Following the lockdown announcement on 31st October, we were expecting to see a market slowdown. We’d analysed what happened in Leicester during their increased restrictions, as well as other areas in Tier 3, and the data clearly showed that heightened restrictions subdue lettings activity. It’s therefore not a surprise to see rents down and voids up during November.”