Housing supply improves as the market starts to slow

February picks up where January left off, as the second month of the year proves to be even stronger than the first. New seller asking prices hit a new record high of £348,804 this month, rising by 2.3% (+£7,785). February normally sees a rise in asking prices from January, but this is the biggest monthly jump in cash terms recorded by Rightmove in more than twenty years of reporting, and the annual rate of asking price growth (+9.5%) is the highest recorded since September 2014. This new record means that average asking prices have now risen by nearly £40,000 in the two years since the pandemic started, compared to just over £9,000 in the previous two years. The pandemic continues to influence many home moves, with this month’s price growth driven primarily by the “second stepper” sector – those who may find themselves in need of more space and are now ready to move on from their first homes. As the final pandemic restrictions now look to be ending and returning to the office is encouraged or required by many businesses, London has recorded the biggest jump in the number of buyers sending enquiries of any region (+24%), a new price record, and its highest annual rate of price growth since 2016.

Tim Bannister, Rightmove’s Director of Property Data comments: “The data suggests that people are by no means done with their pandemic-driven moves. Such a significant societal event means that even two years on from the start of the pandemic, people are continuing to re-consider their priorities and where they want to live. As the final legal restrictions look to be ending soon, and more businesses are encouraging a return to the office for at least part of the week, we now have a group of movers who are looking to return closer to major cities, or at least within comfortable commuting distance of their workplaces. High demand and a shortage of available stock are supporting a rise in prices and a new record average asking price this month. The rising cost of living is undoubtedly affecting many people’s finances, especially those trying to save up enough for a deposit to get on the ladder or to trade up. However, despite rising costs and rising interest rates, the data right now shows demand rising across the whole of Great Britain, with many people determined to move as we head into the spring home-moving season.”

Fear of missing out in the current competitive market is fuelling rising activity from both buyers and sellers. In a market that is still very short of available stock, more potential buyers are sending enquiries to agents compared to this time last year to try to beat the crowd, with the result being that buyer demand is 16% higher than at this time in 2021.

While there is still a mismatch between buyer demand and the supply of available homes, the early signs of a better-balanced market that we reported at the end of 2021 are now starting to come to fruition. The number of new sellers listing their homes for sale is up by 11% compared to this time last year, providing some much-needed fresh property choice, and January saw a rise of 11% in the number of people requesting a home valuation from an estate agent.

These sellers who are taking action now, many of whom are also buyers, are putting themselves in the best possible position to secure their next property. Agents are reporting many cases of movers who have missed out on their dream home because they did not already have their current home on the market or sold (subject to contract), and were pipped to the post by a competing buyer in a better position to proceed with the purchase.

The timing of this increased activity is ideal for both current and would-be sellers, as data from Rightmove shows that March is historically the strongest time to sell, with the highest number of buyer enquiries per property for sale. This means that competition between buyers is generally at its strongest in March, providing an opportunity for would-be sellers to have the best chance of selling their home quickly for a good price.

Bannister says: “It seems that the fast-moving market has really hit home for sellers this month, with a number of those who are also buyers putting themselves in the best position to secure their dream home by becoming a ‘power buyer’ and getting their own home on the market first. This in turn is driving a rise in new listings compared to last year, giving the existing pool of buyers some fresh choice. Fear of missing out on one’s dream home is really driving market behaviour at the moment, as movers look to do all that they can to avoid the disappointment of being too slow to secure their ideal property. We’re seeing buyers sending more enquiries for available homes than usual, and doing everything that they can to put themselves at the top of the list. Setting up instant property alerts, keeping a keen eye on fresh property stock coming to market each day, and acting immediately rather than waiting are other tactics that some successful buyers are using. Those would-be sellers who are considering coming to market in the near future will be pleased to hear that March is historically the best time to sell, with sellers normally seeing the most enquiries for their property, and therefore the best chance of a successful sale.”

Ben Hudson, Managing Director at Hudson Moody in York, said: “Like many, our biggest challenge is a lack of stock. As soon as anything new comes onto the market, it is flying off the shelf, with multiple buyers competing for the final sale. With so many potential buyers, many properties at the moment are selling above the asking price, which can make valuing a property accurately a challenge as we don’t want to give unrealistic expectations. It can be difficult for buyers at the moment, with not a lot of choice and tough competition for the properties available. However for sellers, most new properties are getting huge traction at the moment, which makes it a great time to come to market, and we’d recommend those considering selling soon take action now. The good news is we are starting to see the first signs of the pressure easing, and more traditional seasonal markets returning after two years of frenetic pandemic markets. We are going out to value more properties, and seeing more new listings come to the market for sale, and we are seeing signs of a busy, but more traditional spring season.”

Barry Chuwen, of MQ Estate Agents in Scotland, said: “We’re seeing a dynamic market north of the border, with enquiries and sales greater than normal for the time of year. We are still seeing strong demand for all types of properties, from the first-time buyer market to large family homes, and we are also seeing a rise in the number of landlords entering the market, seemingly keen to capitalise on greater values. Some people believe things will inevitably slow down in the spring, but for the moment, demand remains strong and this is forcing prices up and up.” 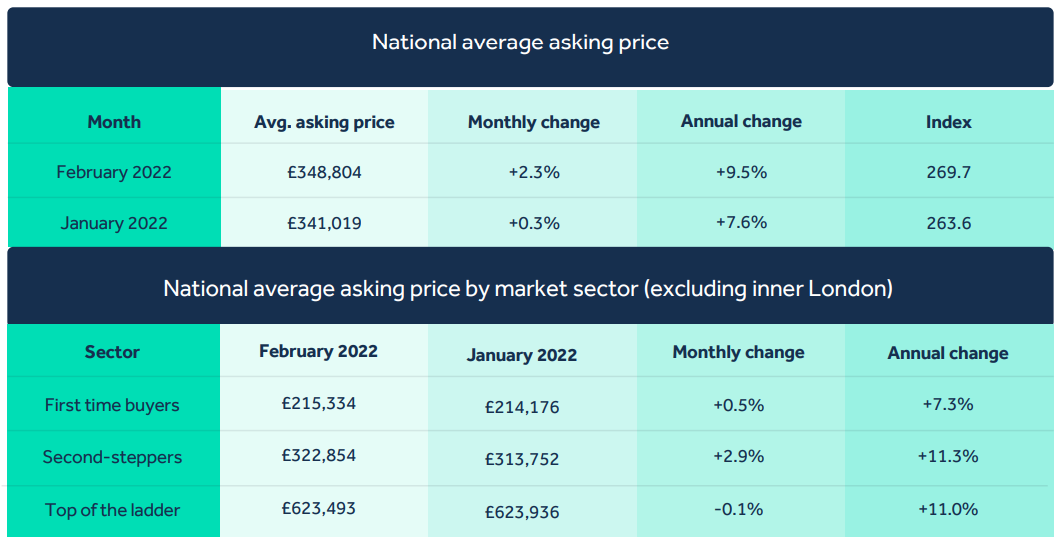